Make a general donation to the 2020 Walk to End Alzheimer's - Bloomington, IN 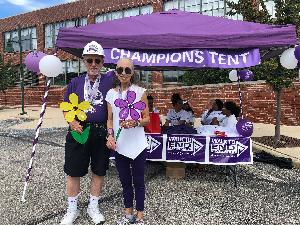 Each Spring brings showers and flowers, AND the start of planning for the September Bloomington Alzheimer’s Walk.The annual event is personal for Jerry Gonyo and Wendy Rubin, this year’s Walk co-chairs. Wendy’s husband DIck Rubin lived with Alzheimer’s for six years until his passing in 2013. Jerry’s wife Darlene lives at Hearthstone with multiple diagnoses including Dementia following a 2001 diagnosis of Mild Cognitive Impairment. Jerry and Wendy are both active volunteers with the Alzheimer’s Resource Service and bring passion and commitment to their roles as Walk co-chairs. Dayna Thompson, our Wonder Woman Alzheimer’s Educator, led the Memory Marchers team for six years until 2018 when Jerry took the lead. Last year, Jerry and Wendy, #1 and #2 in fundraising, proudly led Memory Marchers to victory for the Alzheimer’s Association.For the upcoming 2019 Walk, Jerry has chosen to DOUBLE all donations to Memory Marchers raised by August 15th. His gracious and extraordinary offer affirms his dedication to finding a cure for this dreadful disease. It will truly take a Village. We ask you to join us and be part of Memory Marchers as we walk to end Alzheimer’s. Let’s make it happen in our lifetimes.Jerry Gonyo and Wendy Rubin, co-chairs