LISA is fundraising to honor 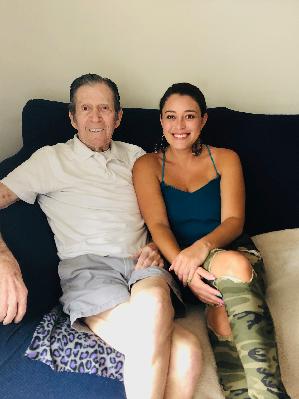 For years I had been noticing that my Father was acting, as I would later describe to doctors, "loopy". He once left the house in the middle of night in a robe to look for my mom, who was in the house sleeping. I had requested many times that they have him evaluated by a neurologist. Ultimately we did & the test came back that he did not have dementia nor Alzheimer's. As time went on, I sat by as his memory and abilities became more and more limited. We redid the last in the fall of 2019 and this time, the results showed Alzheimer's.

My Father had suffered a very traumatic head injury while working for Haliburton in the Amazon jungle. He was airlifted to Texas for surgery on his brain. His forehead had shattered and it was replaced with an acrylic plate. I wondered if this accident had led to this illness. If the trauma to his brain ultimately led to Alzheimer's.

My Father is now 86 years old. He has some great days, and for those and really every day with him, we are thankful. Its taken us some time to adjust. My children, especially my 11 year old daughter who has always been really close with her Grand Father, sits and watches in disbelief.

We have had to change almost everything around so that my Father is watched 24/7. He once took care of me, and now I take care of him. A beautiful tragedy.

To anyone who has a newly diagnosed family member or friend, patience is key. They don't know what they're saying, or trying to say. They don't know what they're doing, or why they're doing it. Where there going, why, or for who. Let them repeat the same story500 times and always react as if it was the very first time you heard their story. Show empathy, compassion and pray that your good deeds will spare you from this horrendous, life-changing, ever-evolving, thief of memories illness.

Thankyou for joining the fight against Alzheimer's and team “JDs Friends”.

From my heart, to yours. Lisa