Alan is fundraising to honor 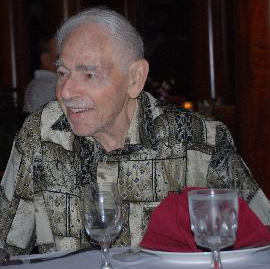 This is my 5th year participating in the Walk to End Alzheimer's. I am not a fundraiser, and I hate asking people for donations, but this cause is very near and dear to me. My father was a victim of Alzheimer's, and I witnessed him slowly succumb to the disease. It is a disease that is hard on the sufferer, and even harder on family and friends.  I would like to think that, in some small way, that I can play a part in helping to eradicate the scourge of Alzheimers.

The picture shows my Dad at his 85th birthday.  He was surrounded by my Mom, his children, grandchildren and a great granddaughter, and he was wondering why everyone was there, and in some cases, who they were. Not even 6 months later, he was hospitalized, and then moved to a Memory Care facility, one of the saddest places you will ever see.  Before he passed away a few months shy of his 87th birthday, he did not recognize us, and could not attend to even his basic needs.

The end of Alzheimer's disease starts with you. Please make a donation to help the Alzheimer's Association advance research into methods of treatment, prevention and, ultimately, a cure.