Make a general donation to the 2020 Walk to End Alzheimer's - Napa Valley, CA 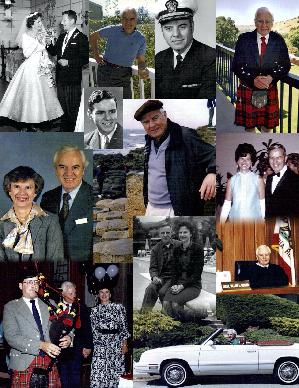 My Mother and brothers posted this collage of moments in my Dad's life at his door in Aegis Living in Pleasant Hill, hoping he would recognize it was his room.

My father, William Dunbar, a retired attorney and judge, suffered from Alzheimer’s Disease for the last few years of his life. My mother was his primary caregiver through most of that time, even though she was battling leukemia and lymphoma herself. It was extremely difficult for her, for my entire family, but she resisted giving up her role as his life partner and caregiver – “ til death do us part”.

One of the most important events that happened for me and my family was that shortly after my father received his diagnosis, my parents met individually with my two brothers and me and explained the stages of the disease and what we should expect and plan for.

My father had noticed more and more memory problems and was keenly aware of the possibility of something more going on than aging since his mother suffered from what they used to call senility.

Before any physical deterioration was evident, my father went through the expected stages of emotional changes associated with the disease. He went through depression, when he would withdraw more than normal from family and friends. Over many months, he became increasingly agitated - sometimes over nothing at all. As the disease advanced, this worsened and included becoming verbally abusive and combative.

He also was defiant about the loss of his independence. He refused to stop driving, so we took away his keys.

One day, he left home without telling my mother. He was missing for hours. We contacted local authorities to be on the lookout for my dad. I went frantically driving through their neighborhood in the East Bay, thinking he may have walked away.

Several hours later, he showed up back at home, not understanding why we were upset about his disappearance.

I think this disease is harder on the caregivers, often family, and friends who see the physical and mental decline of someone they love.

During the last months of his life, what was sad and painful for me was knowing I was talking to someone, my own father, who thought I was a total stranger. He was being polite, but not recognizing I was one of his sons.

With the help of professional advice, we decided not to tell my father when my mother died in December 2008.  We figured he would not understand, or if he did it would only cause him anxiety and pain.

While she was his primary caregiver, one of the biggest challenges for my mother was finding adult day care for him. She tried to enroll him in activities where they lived, but he refused to attend. That was during his more agitated stage. She tried an in-home caregiver, but he would not tolerate that either.

My brothers and I would visit, but he usually showed little interest in talking or doing anything. At that point, we were used to him repeating things shortly after saying them. He was no longer my father.

What was most frustrating was knowing what an independent, intelligent, loving and proud person he was before Alzheimer’s took away who he was. Alzheimer’s strips away so much of whom a person is. We watched the steady decline of spirit and joy in an amazing person.

It was helpful to understand in advance the stages my father would go through as the disease advanced. Being aware helped us react and better understand the dysfunction caused by the disease.

The Alzheimer’s Association truly is leading the effort of education and awareness. They provide families with valuable information that helps them prepare for the progression of the disease. Understanding what to expect, how to prepare and how to deal with the deterioration of a loved one helps lower the fear and anxiety.

I was proud to help bring the first Walk to End Alzheimer’s Disease to Napa County, especially here to Yountville.

I look forward to continuing my advocacy both personally and as Mayor of Yountville. I will continue to share my story because I know firsthand how important it is to prepare and support families dealing with it.