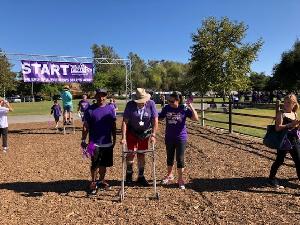 Last year (2019) I was a member of a larger Team.  My friends and family raised close to 85% of what the larger team raised.  This year (2020)I have established OUR own team:  CHARLIE PARKER (HONORING CONNIE HENSON & DICK MEADE). Connie is my sister who has been "living" with Alzheimer's for over 15 years.  Dick Meade is my cousin Chris's husband who passed a way a few years ago from Alzheimer's.

Last year, the team I was on and my team were one of the largest Fund Raising Teams in Inland Valley of Southern California.  I would like very much like to exceed that this year.  I can only do that with donations from my friends, family and others who see this page.  Although there is nothing funny about this insidious disease; there ae funny stories.

Another story:  Connie's daughter took Connie to a large Fred Myers Store in Vancouver WA.  Robin said "Mom, let's go to the restroom."  Connie said "I do not have to go!"

Robin asked her to sit on a bench outside the restroom.  When she came out Connie was gone.  Robin panicked and began a search for her mother.  She quickly went to Customer Service and they made an announcement over the public address system describing Connie.

please Support our team for the Alzheimer's Association Walk to End Alzheimer's®, the world’s largest event to raise awareness and funds for Alzheimer’s care, support and research.