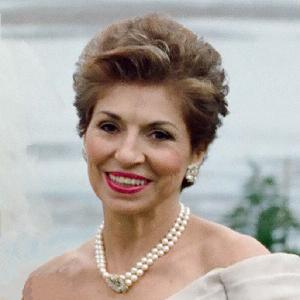 Elizabeth Mehler Cohen was born Elizabeth Ethel Mehler in Barranquilla, Colombia on December 4th, 1940. Her mother, Anita Lustgarten, and father, John McMillan Mehler, escaped Opatow, Poland, and Vienna, Austria, respectively, and emigrated to Colombia where they met and married in 1939. Lisa was the eldest of four siblings: Dorothy, John (deceased), and Robert. Along with her family, Lisa moved from Barranquilla to Caracas, Venezuela in 1945, where she spent her childhood. She later moved to Miami, Florida, graduating from Miami Beach Senior High then attending post-baccalaureate school in Aroso, Switzerland. Lisa graduated from Brandeis University in 1963 with a B.A. in Political Science and fluency in five languages.

After college, Lisa moved to New York to live with her grandmother, where she volunteered at Mt. Sinai Hospital as a translator and met her husband, Dr. David Max Cohen. They married in 1964 in Caracas and moved to Augusta, GA to begin their life together.

Lisa raised their three children, Karen Cohen Segal, Nancy Cohen Paul, and Michael David Cohen, in Atlanta, GA. As a nurturing mother, Lisa provided her children with a solid foundation of love and support while also instilling confidence, independence, and resourcefulness.  As a cosmopolitan woman, Lisa was a natural extrovert who relished in the joy of meeting new people. No one was ever a stranger to her, and her close friends became her family. Lisa especially loved entertaining and had a special talent for hosting elegant dinner parties where she fostered new friendships amongst her diverse community.

As her children matured, she pursued a variety of career opportunities that reflected her love of people, desire to help others, and engaged her many talents.  Whether she was navigating Lenox Square Mall with international visitors, helping fellow Atlantans find their dream home, providing comfort and reassurance to immigrants as a legal translator, or volunteering as a docent at the High Museum in Atlanta, she brought passion, wisdom, and empathy to everyone she encountered. In her free time, she competed as an avid tennis player and spent many days skiing down Vail Mountain enjoying the majestic views and memorable slopes accompanied by her friends and family.

Lisa became a grandmother, taking on the name Nana, a title that brought purpose and passion to her later years.She taught all eight of her grandchildren to walk, ski, and live each day with love and deep appreciation of family. Unfortunately, Lisa was diagnosed with early-onset Alzheimer’s in 2002.  Even as her memory began to fade, she still found joy and companionship with her husband, David, as the two split time between Vail and Atlanta. During these years, she continued traveling, entertaining, and dancing with David, her children, and grandchildren. She cherished the love and support from the devoted staff at the Silverado Senior Living Center in Los Angeles, where she resided for her final eight years.

In honor of Lisa’s memory, the family requests donations be made here.