Her Grandfather and Grandma. 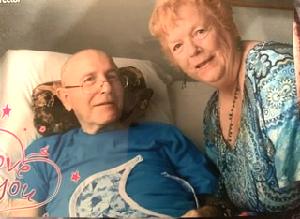 I have joined the fight against Alzheimer’s Disease in honor of my family members who have suffered from it. My Great grandmother was diagnosed with dementia when I was younger. I remember talking to her on the phone and she didn’t remember who I was. Later that year we went to visit her, I stood in front of the woman who I’d spent countless summers with sitting outside snapping green beans with her for many hours, and her looking at me and not knowing who I was. I was a teenager so I didn’t understand at all I just knew the woman who I loved very much had no clue who I was and it killed me inside. I left that day without hugging her because I was scared. That’s something I’ll regret til the day I die. Fast forward to many many years later, my grandfather started doing something’s out of the ordinary. I couldn’t figure out what was going on we had many tests done even had a surgery for some water on the brain hoping that that would help. We later found out from the neurologist he had what was called Lewy body dementia. This was a devastating blow, to watch a man who is so active who windsurfed and walked and kayaked deteriorate into a tiny frail little thing. For seven years we watched him get worse. He was stuck his own body he couldn’t even move to do anything for himself. There  were times I would sit and talk to him and he thought I was my mother. I would let him call me JoAnn and never correct him ,because it made him smile. If I still saw that smile I knew there was a piece of him left in there. He taught me not to be scared of it, and I made sure I hugged him and loved him anytime that I left. I wasn’t going to let what happened to my grandmother happen to him. Even if he didn’t know me he would know someone loved him with just a hug or touch. Eventually this terrible disease finally took his life. Two years after his passing his wife, my grandmother found out she has vascular dementia. I am now a caretaker a second time around. It’s extremely hard and rewarding being a caretaker. Watching your love ones go through this terrible disease that takes their thoughts their memories and eventually their ability to do anything. I get to be there holding their  hand through this, letting them know they are loved when they don’t know who they are. Even though it’s hard being a caretaker it’s so much harder for them! I wish there was a cure for this, I wish this could be reversed, I’m hoping one day there will be enough research that we will be able to say we ended Alzheimer’s and dementia! I will walk for them and I will walk for so many more that are going through this!