Make a general donation to the 2020 Walk to End Alzheimer's - Modesto, CA

Heather is fundraising to honor 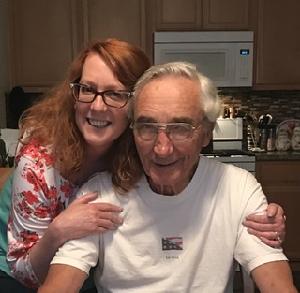 Thank you for visiting my page. On March 26, 2020 I lost my Dad to this horrific disease. My Dad Jack, was an AMAZING man. I don’t say this just because I am his daughter, but anyone you talk to that had the privilege of knowing him will tell you the same thing.

My Dad was literally a genius. He could do math equations in his head, that most couldn’t do even with a calculator. He was an avid runner until the age of 70, at which time he took up walking 7 miles a day, gradually walking less each day until at the age of 84, this disease stole that pleasure from him. At the time of his death, he was 86 years old, had never had any surgeries, heart disease, high blood pressure or diabetes. He also still had all of his original teeth. His doctors were amazed.

This is such an awful disease that steals so much from our loved one, but also from us who love those with this disease. I'm leading the way to Alzheimer's first survivor by participating in the Alzheimer's Association Walk to End Alzheimer's®. Currently, more than 5 million Americans have Alzheimer's and that number is expected to grow to as many as 14 million by 2050. Our future is at risk unless we can find a way to change the course of this disease. I’m DETERMINED to do what I can to end Alzheimer’s!!