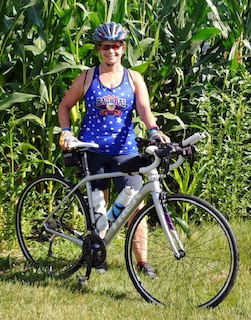 This November 6th we are riding to honor Susan Sobotik Alexander in the "The 2nd Annual Texas Ride to End ALZ".

Long bike rides and running were a very important part of Susan's life. In fact, Susan's last organized bike ride was riding 428 miles across Iowa in 2018's "46th Annual RAGBRAI" with her best friend Bonnie. Back in the 1990's Susan rode in the Houston-to-Austin "Texas MS 150".

Susan retired in March 2019 and moved from Sugar Land, Texas to Salisbury, North Carolina. She planned to build a home on scenic High Rock Lake next to her sister and brother-in-law Sandra and Rick. The house plans were cancelled as signs of Alzheimer's arose shortly after her move. This past March, Susan moved into an Assisted Living Facility near Sandra and Rick.

There are more than 6 million Americans living with this disease, and over 11 million family members and friends who provide them with care.

We are asking for your support because there is no shortage of ideas in Alzheimer’s research — only dollars. The Ride to End ALZ is a fully-supported, one day fundraising event where every dollar raised supports the Alzheimer’s Association’s efforts to discover methods of treatment and prevention for Alzheimer’s disease.