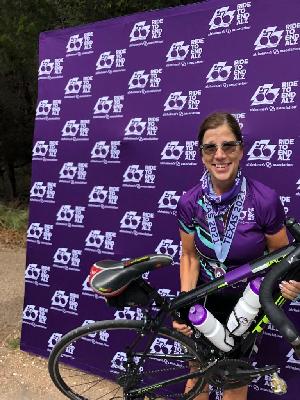 Why I Ride: I ride in Memory of my Dad, John Knapp, a kind and generous Man.  He gave so much of himself to others. As a School Bus Driver and Volunteer Fireman, He touched countless lives.  It was a great loss to our Family and Community when he passed in 2010.  We first became fully aware of his dementia when he disappeared for a day. He drove to lunch one afternoon and didn’t return home after.  Fortunately, He was found and returned home to us. I was equally grateful for his safe homecoming and devastated by the frightened, disoriented & confused man who came home.  Life was never the same after that Day.  His mother, also my beloved Grandmother Wilma Knapp,  had some form of Dementia.  It is My Grandma Knapp  that drives my mission to raise Awareness of Alzheimer’s and other forms of Dementia.  I recall it as a negative time for those suffering with such diseases.  Misunderstood, alienated victims faced with ridicule.  I am thankful for the Alzheimer’s Association’s research and  awareness shedding light on such a Dark Dreadful Disease. am determined to go the distance for all those affected by Alzheimer’s.

With each mile I ride, I am raising funds to advance research toward the first survivor of Alzheimer’s. Thank you for cheering me on.