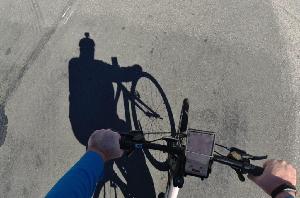 Why I Ride: I ride for a number of reasons. First, I ride to honor my beautiful grandma, Violet Dunham, who suffered heartbreakingly from this disease for years before her death. It took her mind long before it took her body- but I know it never took her faith, and I will see her again at the Father's House through her faith in Jesus Christ. But in the meantime, I want to fight this terrible disease!

I also ride for the numerous friends and church family I have known over the years who have been so terribly impacted. Nearly everyone I know has loved someone struck by it.

I ride for them all, to honor their memory, and to fight on their behalf where they cannot.

Who else out there is heartbroken for what Alzheimer's has taken from a loved one, and wants to do something to fight this dreaded disease? I want to invite you to consider how you might join in:

Do you do something fun that could be used to help raise funds? I ride a bike, so I have set as a goal 2,500 miles for this year- roughly 60 miles per week for the rest of this year. What do you do that you could do for the team? Ride a bike. Take a walk. Craft a bowl. Join the Team and start your own drive, whatever you want it to be. Then set a goal for the year. Then use your drive to help us join together to fight this terrible disease.

The Team Page can be seen here:

If you have someone you want me to "ride for", donate to my ride and let me know. I'll add an update to my FB update page saying, "Today I'm riding for ____, whose fight against ALZ we honor today."

The system is new. It may be a little glitchy- it isn't all fully live yet. The Spokes Series of fundraisers is literally just out of the gate today. There will be new features added as this new format gets put in. But we are excited to get this going, so we can all come together to help fight this disease!!

Right now, there is no shortage of ideas in Alzheimer's research -- only dollars. Which is why I am asking for your support. This new program, the Spoke Series of the Ride to End ALZ, is a fully-supported fundraising event where every dollar raised supports the Alzheimer's Association's efforts to discover methods of treatment and prevention for Alzheimer's disease.

With each mile I ride, with every activity we do, we are raising funds to advance research toward the first survivor of Alzheimer's. Thank you for either joining the team, or cheering us on.

3/4â€ 142 miles this year. Just 50 this week. Ash Wed. and Stations of the Cross displays dominated the middle of the week.