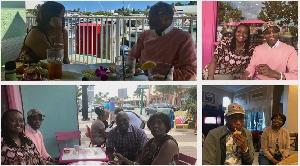 Why I Ride: Last year I rode for my mom, Catherine Sanches, who had dementia.  This year I'm riding for her big brother, my uncle Thomas Francis, who also suffered from dementia before we lost him on June 15, 2022.  My uncle enlisted in the U.S. Marine Corps in 1963 before the official draft for the Vietnam War began.  As a Marine, he traveled to Cadiz Spain, Goose Bay Labrador, and Puerto Rico before being stationed in Barstow, California, rising to the rank of Corporal and earning an honorable discharge.  His travels later took him to Liberia, Senegal, Paris and German.  My uncle was married to his wife, Delores, for 53 years, and together they raised their children, Ben (Tyrone) and Nia.

I am inspired to ride the 100 miles on August 28th by the strength of people like my Uncle Thomas who battled Alzheimer's the millions of family members, like my Aunt Delores, who love and care for them.

I am also inspired by science. Right now, there is no shortage of ideas in Alzheimer’s research — only dollars. Which is why I am asking for your support. I am participating on the Ride to End ALZ, a one day fundraising event where every dollar raised supports the Alzheimer’s Association’s efforts to discover methods of early detection, treatment and prevention for Alzheimer’s disease.

With each mile I ride, I am raising funds to advance research toward the first survivor of Alzheimer’s. Thank you for helping me and cheering me on.