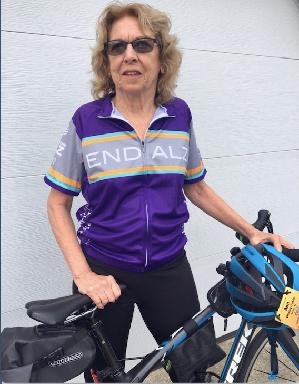 Alzheimer's is a horrible disease that slowly took our mother's life.  That's why I'm still biking (in my 70's) as many miles as I can to raise money for research for Alzheimer's (or any type of dementia)!

It was horrible to see such a slow painful decline in her abilities that eventually led to her death on June 3, 2007. One of her sisters had also died from this disease and a cousin recently died, also; it can run in families. Many who have supported me in the past, and many who will support me this year, know someone who has been affected. Over 6 million Americans currently suffer from Alzheimer’s disease and as our population continues to age this number will only grow. It is because of this that I have been active in volunteering on the planning committee for this ride.

This will be my 13th year riding to help raise funds that are desperately needed to further Alzheimer’s research so that others will not need to go through what we experienced. I join a wonderful team of riders every year who share the grief of this disease and who are fighting against it. 90% of the funds raised from this ride go to scientists and doctors to do research, with the remaining 10% for programs to help Alzheimer’s patients and their families. This research is for possible tests that can be used in earlier detection and hopefully a cure at some point. I am currently participating in research studies at Massachusetts General Hospital and Brigham and Women's, which are funded through this ride.