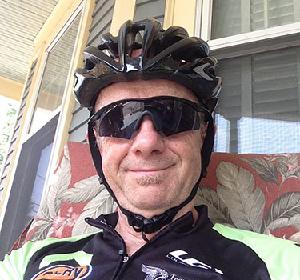 I have participated in The Ride To End Alzheimer’s for 16 years now. I missed one year because of some health issues of my own.

As time goes by we get older, that’s a given. I will admit that there are times when I think about not riding. But then I think about how my brother and I watched our mother slowly slip away from us. Louise Koeppel was the person who raised me— she was the biggest impact on me as to the person I have become, and I had to watch her just fade away. I was no longer able to talk to my mother; she became a stranger.

I think about the friends I have, who speak of their parents in the beginning of their struggle with this disease and what they are up against. I remember my mother.

I think about these things and I think “how can I stop riding to end Alzheimer’s?”

We ride for all those people affected by Alzheimer’s and for a cure.