My Team: Pedals for Popper 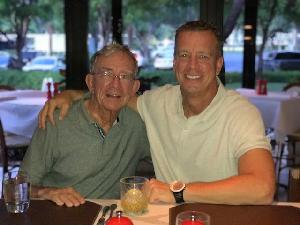 Why I Ride: In March of 2020 my father passed away from Alzheimer's Disease. Dad was a father, husband, brother, grandfather, scientist, PhD, skier, woodworker, veteran, sailor, chef, author, Packer fan, and a guy that could literally do anything...until Alzheimer's. The most painful moment came when he asked me how to change the battery in the TV remote control. A guy that had built a 7 foot tall high boy chest of drawers from Mahogany, and rebuilt a 1971 Jaguar XKE, now was unable to change the battery in his remote control. I saw Alzheimer's reduce this very alive and robust man to a shell of himself. It robbed him of his clarity. It robbed him of his confidence. It robbed him of his memory. Worst of all it robbed him of his dignity. I hope to help end this disease so nobody has to endure this same fate. Not me, not my brothers, not my kids, not anyone.