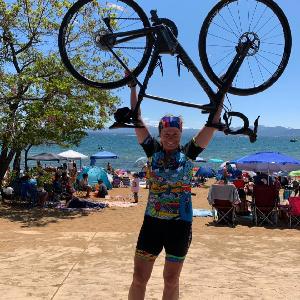 Why I Ride: I am determined to go the distance for all those affected by Alzheimer’s. I am inspired by the strength of the more than 5 million Americans living with this disease, and the 16 million family members and friends who provide them with care. I am also inspired by science.

I chose the Alzheimer's Association this year because of my own personal experiences with brain health and how sports injuries such as Traumatic Brain Injury (TBI) can impact a life. I've had 3 sports concussions over the course of my life; softball, swimming (yes, really!), and soccer.  Recently I suffered a 4th concussion, falling backwards while walking my dog.  I slipped on the ice, my feet came out from under me and that's all it took.  For almost two weeks I was feeling the after-effects of that fall and it was only a MILD concussion.

Though I don't have Alzheimer's or dementia, I did have to deal first-hand with problems such as some memory loss, slurred and slow speech, loss of visual and mental focus, slight hearing loss, change in behaviors, emotions and mood swings, and blackouts during a highly stressful time in my life..  The worst incident was when I blacked out while driving.  When I found out I had put $3500 of damage on my car and had no recollection of what happened is when I first found out about the impact of TBI, many, many years following the concussions occurring.  That was almost five years ago.

Fortunately, the worst of those symptoms have been eliminated or are managed, and at this point I am in pretty darn good health again. At worst, I am still a bit hard of hearing!  I am forever grateful to the doctor who probably saved my life by recognizing the association between TBI and the changes I was experiencing and set me on the path to improved health.

It has given me a stronger appreciation and concern for the health of my brain and what I can do, as a healthy woman, to help those who are impacted by the devastating effects of diseases of the brain such as Alzheimer's.

With each mile I ride, I am raising funds to advance research toward the first survivor of Alzheimer’s. My goal is to raise $2500 and ride 100 miles. The event is on June 14th in Fort Collins, CO.  First a long car ride, then a long bike ride!

Thank you for cheering me on and helping me with this journey of health.

Thank you for donating!