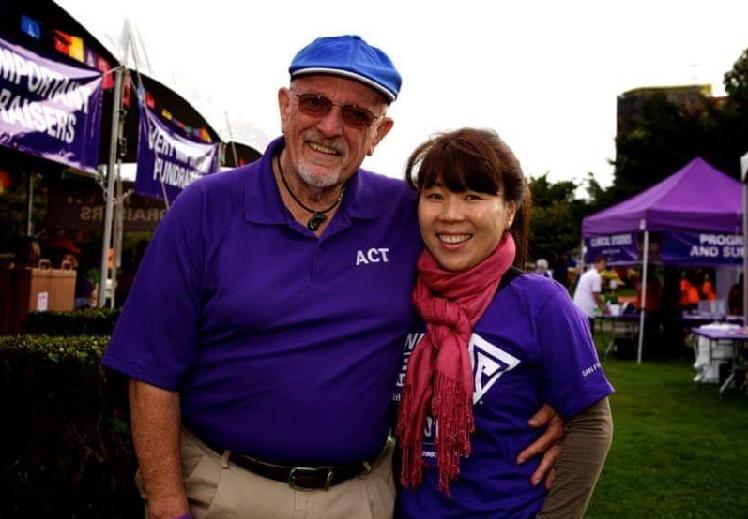 Rick and I met in 2008 on a flight from San Francisco to Chicago. At that time, I was staying at my friend's house in Chicago for 1 month vacation from work in Korea. Rick was a board member of Alzheimer's Association and he was on the way to the Alzheimer's conference in Chicago. Universe worked hard to make us to meet since we lived in different time and place. My flight strangely cancelled and I had to take Rick's flight. Rick suddenly changed his seat to next to me just a day before we met.

The first thing we realized was that we have the same values about most things in life including our perspectives on life, family, love, adventure, dream and caring people. Rick had many extraordinary experiences but he always anticipating more great adventures. Forever young man. That was his character. He always loved learning, helping and caring. He was energetic, passionate, confident, sincere, kind, cute and sexy! Even he was a great cook!

Our 10 years together.. it was a pure joy and happiness. He was my soul mate and dream husband. But suddenly, unexpectedly he passed away in January, 2018 from a heart attack. I experienced death as well after he died. I've died. Time can't heal everything and I miss him everyday, every moment. I loved his everything, literally everything. His smile, voice, hand writing, his big heart, faith and commitment. Supporting the Alzheimer's Association was a big mission of his because he was a care giver for Alzheimer's and so he knew how much it's scary, hard and dark time to the family, to the care givers.

I will remain loyal to his commitment and make him proud of me and our community. This is our 7th year for “The Longest Day” in June. I believe Rick will support and watch all of us from above. He will be forever missed and loved. I LOVE YOU, HONEY BUNNY. ALWAY AND FOREVER.

Rick’s history with the Alzheimer’s Association

Rick got involved with the Alzheimer’s Association when his first wife, Susie, was diagnosed with younger-onset Alzheimer’s. Rick was Susie’s caregiver for 10 years – she died in 2008 at the age of 61. Rick started participating in the Walk to End Alzheimer’s in 2001.

Rick was a committed leadership volunteer with our chapter, involved in all parts of our mission. Rick was a former Board member, member of many committees, former Chair of The Longest Day committee, top Walk to End Alzheimer’s fundraiser and advocate. He was a relentless fundraiser and his Smith Ranch Chili Cook-Off was an event to remember. He and his family have raised over $300,000 for the Alzheimer’s Association. Rick supported fundraisers such as Memories in the Making Art and Wine Auction and Reason to Hope as a past committee member, donor, and supporter. His lively auction bidding was always fun to watch. Rick had already set up his team for The Longest Day this year.

Rick volunteered to give educational presentations, frequently agreeing to travel to more remote parts of our chapter territory.

Rick was such a voice for all of us – and was intimately involved in our advocacy work, attending Alzheimer’s Advocacy Day in California and the Advocacy Forum in D.C., becoming an Ambassador for Congressman McNerney and serving on the California Alzheimer’s Advisory Committee. He read everything the Association sent him, and turned it around immediately to advocate for others.

Rick’s passion and determination brought others to our cause. He was a friend and supporter for many of us in our work, and a tireless advocate. Rick showed up to every activity wearing Alzheimer’s Association gear and was very well informed, citing data and breakthroughs, often events that had happened just the day before.

Rick was full of enthusiasm and energy for our work. Staff, other volunteers and event participants appreciated Rick’s words of encouragement, tips and his smile. We learned so much from him, and he inspired us – by his example – to be relentless. He will be greatly missed.

"IF I HAVE SEEN FURTHER IT IS BY STANDING ON THE SHOULDERS OF GIANTS." - SIR ISAAC NEWTON