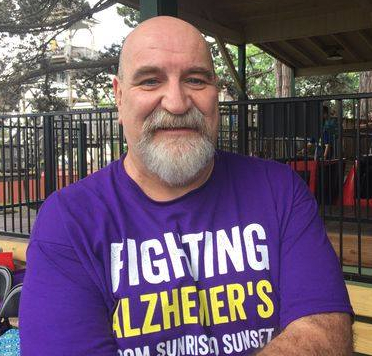 On June 21, 2022, I will once again be participating in 'The Longest Day' by riding a TBD rollercoaster from sunrise to sunset!

From 2012 through 2018, I rode roller coasters all over North America, raising nearly $30,000 for my annual Roller Coaster Crawls to End Alzheimer's events. The roller coaster theme is a tribute to my brother Kevin J. Moran (1958-2012), and avid rollercoaster enthusiast. Kevin succumbed to early-onset Alzheimer's and passed away at 51 years old, leaving his wife & two children.

In 2015, I did a similar 'Longest Day' fundraiser riding the Jack Rabbit for 100 rides. Last summer, as the park celebrates the roller coaster's 100th Anniversary, I felt it was time to reprise the marathon and fundraiser! Unfortunately, due to COVID19 restrictions, the event was not officially supported by the park, and I was only able to accomplish 20 rides as a regular daily customer.

This year's rollercoaster to marathon is yet to be determined. I have a few in mind and have sent inquiries to the affiliated amusement park's management.

I invite friends, family & supporters to join me by pledging a dollar amount per ride (x100 for the scheduled 100 rides) or by joining Team Kevin's Koasters and join me in fundraising and/or for a ride (or 6) on marathon day!

On June 21, stand up to the darkness of Alzheimer’s. Join my team for 'The Longest Day,' the day the Alzheimer’s Association calls on everyone to fight Alzheimer’s disease. Together, we'll raise funds and awareness for Alzheimer's care, support and research.