His father whos been living with alz for years. 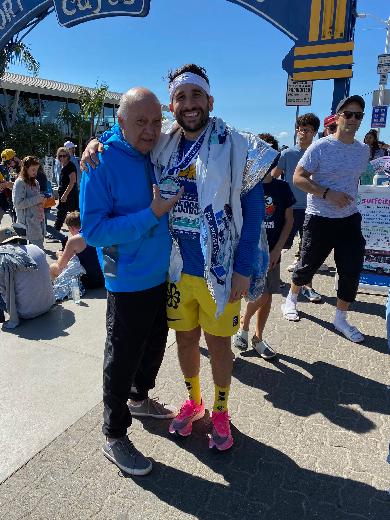 For the second time, I’m back again to run the LA Marathon in honor of my father Octavio Rene De Leon. He is truly an incredible man who continues to inspire me each and everyday. For those of you who don’t know him, he immigrated to the United States from Guatemala after finishing a professional soccer career, where he played for the national team for several years. Due to civil unrest he was forced to leave the country and start new in the United States with a few dollars in his pocket. He picked up odd jobs here and there until he met my grandfather and started playing recreational soccer down in Griffith Park. It was there that he met my mom and her family and the rest, as they say, was history.

Fast forward to today and he has been diagnosed with Alzheimer’s for years. It’s been difficult to slowly watch his memory fade, but his true strength comes out in his attitude. Anyone who knows my dad knows that his favorite response to, “how are you?” Is ALWAYS “Super Fantastic!” So much so, that he is known as Mr. Fantastic by people he often sees. His bright and upbeat outlook has always provided me with perspective. He is a literal embodiment of the American Dream and I am living out of the benefits of his sacrifice. In my small way, I hope that our donations can quickly bring a resolution to this terrible disease.

Thank you for taking the time to read, donate, or help spread the word. Any or all versions are helpful and appreciated!