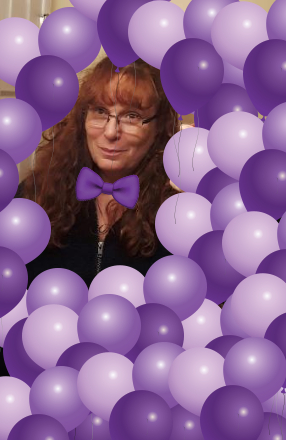 As many of you know, I was diagnosed a few yrs ago with Early Onset Dementia w/Alzheimer's. At this time there is no cure for Alzheimer's. I have been very fortunate as to be blessed by a very supportive immediate family, close friends, doctors, and support Peer to Peer groups and The Alzheimer's Association.

I am only at the beginning of this long journey as such I am very appreciative for I have seen myself the benefits that will in place for my family when they are needed. I have also at this time received so much love, support, and knowledge. I do not know where I would be today without my fellow Peer support.

I am also very fortunate as I have been able to assist in the Alzheimer's Impact Movement, AIM- as an Advocate encouraging our elected officials to support the much needed Bills for the Younger Alzheimer's Patients, the Hope Act, and many more. This has brought much meaning into my life. It is amazing when you sit in front of a Legislator (or anyone actually) start to speak about a Bill you need help with and watch their mouth drop when you say: This Bill effects me personally because I have Early Onset Dementia w/Alzheimer's. The same response is "You don't look like you have Alzheimer's" No, I don't..

Here is reality...I am what the new Alzheimer's looks like. We are getting younger and younger. I was Diagnosed at 52, so far the youngest I have met is a 46 yr old. Buckle up reality is coming in hard and bumpy. We need to find a cure now.