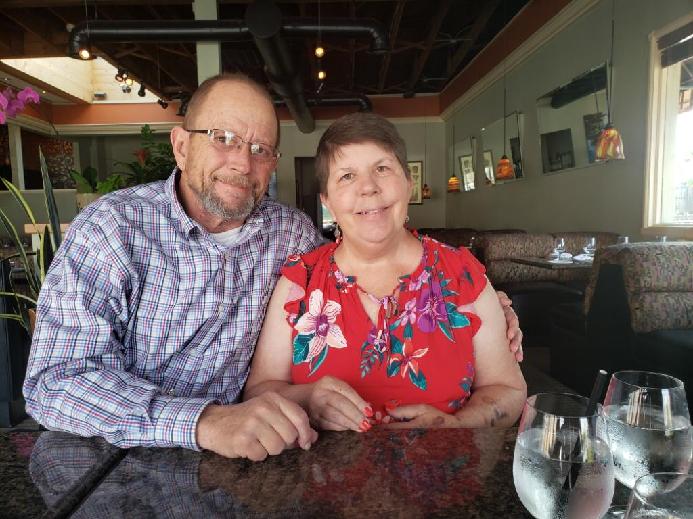 About seven years ago, my mom was diagnosed with a horrible disease called Alzheimer's. It was so hard to see her health decline so quickly. Two years later she passed away with my sister and I by her side. At that point I wanted to educate myself about this horrible disease but life went on and I had to take care of my four growing children ages 15, 11, 10 and 4. And to be honest, it got put on the back burner.

Three years later, I started a job at Publix in their bakery after being a Stay At Home Mom for 18 years. I remember having a conversation with my pastor, Chuck Parker a few months into my new job. He asked me "Have you shared Jesus with anybody at Publix?" I laughed and told him "no". But that question kept coming back to me. But if you know me well, I don't really share the gospel with people I don't know well. I knew if I was going to do thisIt was going to be a GOD THING. I wasn't just going to start telling people about Jesus.

Over the past year and a half, I have learned a lot about myself. And the funny thing is, people knew this about me already. But I was the last one to know I am a people person. I am a lot like my mom. I can talk to any stranger on the street. Or in my case, at the Publix bakery. I have met many people, helping them decide on what kind of cake or dessert they want for their special occasion.

There are many "Regulars" that come into Publix two, three, four times a week. This is how I met Chip and Marianne. Chip and Marianne had been married for 40+ years. Marianne had Alzheimer's. And now Chip was her caregiver24/7 365 days a year. I am sure this was the hardest job he had ever had. But every time they came into the store, he had the biggest smile on his face. You could tell he loved her with all his heart and soul. Just the way he looked at her. You could tell.

This past Valentines Day, Marianne had a seizure and was rushed to the hospital. Where she spent almost 3 weeks. The day she went in, my friend, Melissa and I went to visit them at the hospital. I was reminded of the question my pastor asked me, "Have you shared Jesus with anyone at Publix?" And seeing Marianne in the hospital brought back a lot of memories of mom going back and forth to the hospital. It is so hard to see the one you love being taken over by Alzheimer's and there is nothing you can do. So, I started praying for Marianne and Chip. I would check on Chip to make sure he had food to eat and just sit with him and his bride. I got to hear all about Marianne and what kind of wife and mother she was. She was an amazing woman.

When she finally got to go home, things declined quickly for her. My friend and coworker, Brandon and I organizing meals for them. I would go over and just sit with her and hold her hand. I had an amazing opportunity to sit with Marianne one night while Chip and his son went out to dinner and spent some time without having to worry about their wife/mom. It was just the two of us, and their two dogs at her house. Marianne was becoming restless. I would hold her hand, stroke her hair and try to talk to her. It just wasn't really helping. She wouldn't drink anything for me either. And then something told me to start playing some old Hymns on their Alexa. It was a good thing it was just Marianne and I, because I can't sing. But I did and she didn't seem to mind. Another thing about me is, I don't like to pray out loud But God was leading me that night. So, I started praying out loud for Marianne. For God to calm her heart. For her to be able to get some sleep that night. And while I was praying, I was holding her hand. She brought it up to her mouth and kissed my hand. That moment I hope to never forget. I cannot explain to you how I felt when she did that. The first thing that came to my mind was "Man, NOBODY is here to see this". But then I started thinking, "If anybody else had been here, I would not have turned on the hymns. I would not have prayed for her. This would not have happened." This was a God thing. This was meant to happened just between Marianne, myself and God. He had planned it. On Saturday, March 21st, Marianne left this imperfect world to live forever with her heavenly father.

Having had this incredible opportunity to love on this beautiful woman and her family has made me really want to help this remarkable organization, www.alz.org

Then I found out about The Longest Day. The Longest Day (TLD) calls on participants to use their creativity and passion to raise funds and awareness for the care, support and research efforts of the Alzheimer's Association. I got in touch with my friends, Brandon, Melissa and Chip and asked if they would be interested in doing something for this day. They were all in. Chip got his son Justin and his girlfriend Stacie to join us too. Some of us met last week and we are wanting to GO BIG! We are looking to have a Family Fun Day on Saturday, June 20thfrom 12pm-7pm at Gray Collegiate Academy 3833 Leapheart Rd West Columbia, SC with food, fun and activities for all. As of right now we are still keeping this date but we might have to move it later in the summer because of the Corona virus but we will be having it.

I hope you will help us try to raise our minimum of $5,000 for this amazing cause and horrible disease. Please think or pray about it. I hope when we do have our Family Fun Day you will come and see us at The Old Mill and come and listen to the different bands that are performing, dance groups performing and different children's activities. If you would would like more information, please feel free to contact me at Perogers12@gmail.com