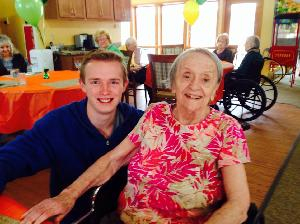 On June 21, I'm participating in The Longest Day, an event to honor the strength, passion and endurance of those facing Alzheimer's disease. I am honoring the memory of both of my Gradmothers, as well as the fight my beautiful Aunt Barb is beginning. My Grandma, Velma Wessels, died from Alzheimer's in January, 2015. I learned a lot about Alzheimer's caregiving when she lived with my mom and I. My Grandma on my father's side, Priscilla (Sal) Cruickshank died from Alzheimer's in May, 2015. Lastly, my Aunt Barb is like a 2nd mother to me, and I even lived with her and her husband John for a semester in college. Just recently she was diagnosed with Alzheimer's. Living with them grew me as a man more than I could have possibly imagined, and I have to do everything I can to help her in her fight.

My team with the Family Caregivers Network will complete an activity of our choosing to raise awareness and funds for the care, support and research efforts of the Alzheimer's Association.

Today, over 35 million people across the world are living with Alzheimer's, including more than 5 million Americans. In the United States alone, more than 15 million caregivers generously dedicate themselves to those with Alzheimer's and dementia. And these numbers will only continue to rise unless we take action.

Together, we can show those facing Alzheimer's disease they are not alone. Please make a donation to help the Alzheimer's Association advance research and provide care and support to those facing the disease today.