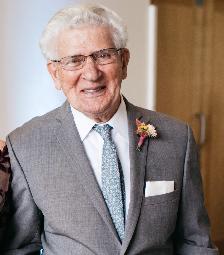 Fighting Alzheimer's in Memory of Earl

On Tuesday July 28, 2020, Earl Macomber, loving husband of 64 years, father, grandfather, and great-grandfather, passed away at the age of 86. Earl was born on October 28, 1933 in Philadelphia. He was in the Navy as a young adult and worked as a mechanic until his retirement. He could fix anything. Earl's charisma and energy made him stand out in any room he was in. He was the life of the party. You could find him on the dance floor at weddings, cracking jokes at the local diner or playing tricks on the kids during thanksgiving but he would never wear a hat. He enjoyed watching old time movies starring Marilyn Monroe and going to the beach in Sea Isle City. One of his favorite things to do was watch the sun rise with a nice cup of coffee. He is survived by his wife, Pixie, his son Earl (Mary) and daughter Millie Jennings (BJ), grandchildren, Earl (Jen), Ed, Pat (Meghan), Mike (Erin) and Kristin and great grandchildren, Olivia, Ethan, Miles and Stella. Family and friends are invited to his visitation on Friday, July 31st, 2020 at Saint Kevin's Church, 200 W Sproul Road, Springfield, PA at 9:30am and a Funeral Mass will be held at 10:30 AM. Interment SS. Peter & Paul Cemetery.