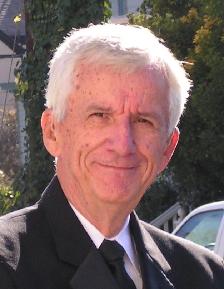 1937-2020
James Sailius passed peacefully on January 1, 2020 in Napa, California after a long battle with vascular dementia. Jim was born May 13, 1937 in Detroit, Michigan. After graduating high school, he joined the Marine Corps where he served for four years. While stationed in Balboa, Jim met the love of his life, Sandra, at a party. To hear Jim tell it, Sandy jumped in his lap and it was love at first sight. They married in 1960 and shared 59 happy years making each other laugh and trying to outdo one another answering Jeopardy questions and solving Wheel of Fortune puzzles.
Jim attained his Masters in Computer Engineering in Southern California. In 1976, Jim and Sandy moved their family of five daughters to the beautiful Napa Valley, so he could work at Mare Island. Jim nurtured a lifelong love of history, airplanes, and flying. In that vein, his wife and daughters and their families surprised him for his birthday with a glider ride over Calistoga. Jim loved to read and could spend hours immersed in a spy novel. He was a die-hard 49ers fan, and spent hours cheering on his beloved Warriors team. Jim enjoyed the beach, traveling to the Tahoe area, and everyday that ended with the letter "y" he could be found lounging around in his favorite color red.
Jim will be forever loved and missed by his wife, Sandy, his sister Maryann (Ray) of Michigan, his daughters Debi (Thomas) of Germany, Denise (Perry) of Napa, Melissa (Greg) of Medford, Oregon, Kim (Bo) of Lodi, and Nikki (Brian) of Petaluma, and his grandchildren Christopher, Nicholas, Kayla, Julia, Laurel, Kyle, Kurtis, Noah, Mikenna, Elijah, and Molly and great-grandchildren Noah, Kaley Rose, Sofia, nieces and nephews, and his faithful Coco. He was predeceased by his parents John and Anna and his sister Betty. A special thank you for the tremendous care provided by Kaiser Hospice Team and caregivers Pierre (Perry) and Rosa.