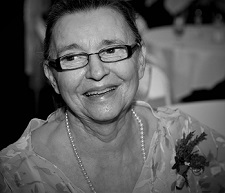 Our beautiful mother at her youngest son's wedding.

She achieved a Bachelor of Science in Home Economics Education at Stout State College (now UW-Stout) in 1958. Before becoming a housewife and mother, she taught Art at USAG Wiesbaden Army Base in Germany where she traveled Europe extensively, and Home Economics at Clovis High School in Clovis, CA where she met her husband, Russell.

Rose Mary was a highly skilled seamstress and cook. She loved gardening, baking, arts and crafts of all kinds, her Catholic faith, and most of all being a mother and teaching all her children as much as she could, helping and encouraging them to always keep striving for whatever they dreamed. She touched many lives for the better, both friends and family, and she will always be remembered for her quiet strength and bright smiles.

Around 17 years ago, Mom started showing signs of being a bit scattered. We all just assumed it was old age and nothing to be concerned about, but it kept getting worse. She was diagnosed with early onset Alzheimer's 13 years ago, when she was only 66 years old. And the slow decline of losing her began.

There were times when she would call us and tell us of the frightening hallucinations she had been seeing, until she couldn't remember what numbers were for and wasn't able to call us anymore. She stopped being able to drive well, and we had to take her car keys away, which I think devastated her, because this disease was slowly taking away all her freedoms to do things for herself. She became no longer able to cook for herself, which further frightened her because cooking was always one of her passions.

Year after year for thirteen years she slowly lost everything of herself. Forgetting even basics of how to care for herself. Although, we believe she always knew her children and what was going on with them. She knew that one of her younger sons and his wife had recently had a little son, and she could recognize them all as who they were when they visited her in the nursing home less than a year before her passing. She remembered who her daughters were, and would say their spouses and children's names with a question in her voice as if asking after them. She would recognize her nieces and nephews when they would stop by to visit. Family was always the most important thing to her, and we are comforted that she retained at least memories of who her family was.

She also always loved music, and when her youngest son, a musician in the Navy, would visit, she would sing along to all the songs he would play for her.

In the last few weeks of her life, she retreated into herself, forgetting how to eat and she went non-responsive before she passed.

Her unceasing kindness and joyful laughter will always live on in our memory of her.

Please donate to this fund to support research into finding a cure for this horrible disease.