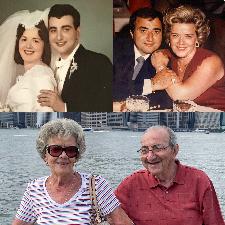 Norma Cammarata, 82, of Brooklyn, New York passed away on Saturday, October 29, 2022. Born on October 19, 1940, in Casoli, Bagni Di Lucca, Italy. She was the daughter of the late Giovanni and Ada Ferrari and sister of the late Osvaldo Ferrari. Loving mother to her two children Anthony Jr. and his wife Lauri and Adriano and his wife Enza. Cherished grandmother of Ava, Jenna, Briana, Daniel and Michael. Beloved wife to her husband Anthony Cammarata for 61 years and was a resident of Canarsie and parishioner of St. Jude Roman Catholic Church.

Norma spent the final years of her life taking care of her husband who is living with Alzheimer's, the brain disorder that slowly destroys memory, thinking skills and, eventually, the ability to carry out the simplest tasks. Given the strong women that she was, she never complained, didn't ask for help and went on each day taking care of all activities herself. A remarkable women.

Anthony and Adriano want to thank everyone for your condolences. Following is the beautiful eulogy Adriano gave at church.

"We'll Always Remember
That special smile
that caring heart.
That warm embrace
you always gave us.
You being there
for dad and us,
through good and bad times
no matter what.
We'll always remember
you mom because
there'll never be no one
to replace you in our hearts.
And the love we will always
have for you."

While preparing for this day, I came across that prayer, a prayer for Mom - and wanted to share it with you.

Obviously a person will always have a special place in their hearts for their mother.
their grandmother.
their wife.
their aunt.
their godmother.
But over the past few days, listening to all the condolences and outpouring of emotion for my mom. I felt something that I think I already knew - that my family is not alone in feeling that love. My mom, Norma, held a special place in the hearts of so many of her friends, and mine and my brother's friends. She was loved by so many that knew her, and that means so much to me and my family.

Now when it comes to my mother's life and her story. What can I say that everyone doesn't already know - she was steeped in tradition, proud of her heritage, loved her family, her children and her grandchildren...
and she loved her friends and the she loved the Boat Club, The Midget, which was a 2nd home to my Mom and Dad for over 50 year - she always talked about her life, and what mattered to her, with anyone and everyone that would listen. We all know her story.

One thing I heard about my mom over and over for the past few days, as everyone tried to process her unexpected death, even though she was 82, is that her death was SO unexpected because she was always a Strong woman, and, THAT she was, STRONG.

On that note, I want to share with you a story that happened just over a week ago, on the day before my nephew Michael and Allie's wedding. That Friday night when I FaceTimed her to ask how her day was ((she LOVED to FaceTime)) she told me "you'll never believe what happened on my way to Mima's "as I'm sure everyone knows, Mima was my mom's hairdresser for 60 years, and one of her closest and dearest friends, she loved Mima and she LOVED to get her hair done at Mima's house in Middle Village Queens. So anyway, she tells me that while pulling out of her garage, she hears something funny - a sort of banging. She gets out of the car and sees she has a flat tire, and that the tire is 1/2 way off the rim. I said oh my God, you should have called me, and she responded, "WHAT WERE YOU GOING TO DO? YOU WERE AT WORK IN THE CITY. I HAD TO GET TO MIMA's!!"

She calls Mima and tells her she might be a little late, call's her mechanic to make sure they were opened and she drives ON HER FLAT, WITH THE TIRE COMING OFF THE RIM to the mechanic - SEE GEE just across the street from this church. As she drives the few blocks, pedestrians are waving her down to alert her about the tire situation. She just smiles at the random people and waves back saying she knows, she knows.
When she pulls into the mechanic's driveway, one guy looks at the rim and says they can't help because there is too much damage and tells her she should go to a tire place. The owner recognizes my mom, as so many people do, walks over and says he'll take care of it, he has a tire and can order a rim and have it there before he gets the car on the lift and get the old tire off. She gets it fixed in under an hour. She even managed to get her car inspected while she was there too!

So My Mom made it to Mima like 60 minutes late, and got her hair done for the wedding - And she looked amazing!

That was my mom, strong, determined and with great hair!

I will miss my mom, I will miss those daily FaceTime calls, and I will definitely miss her cooking, BUT I know that while she is gone from this world, she will live on through all of us that hold that special place in their hearts for her. I thank everyone for keeping her spirit alive forever.

Giovanni and Ada Ferrari migrated to the United States in 1956 with their teenage daughter Norma from Casoli, Bagni Di Lucca, Italy. They lived on Thompson Street in Greenwich Village amongst mostly other Italian immigrants. Within a few years, Norma met Anthony Cammarata who also migrated to the United Sates in 1956 from Sicily to join his father, Luigi Cammarata, who migrated a few years earlier. Norma and Anthony married in 1961. This was an emblematic year for future generations of Cammaratas - - it was in that year, Anthony, with the support of Norma, would start his own business, become an American citizen and in their mind --- living the American dream. Three years later Anthony Jr. was born and the following year, continuing the American Dream, Norma and Anthony bought a brand new house in Canarsie Brooklyn, the house they lived in for 57 years. In 1970, Adriano was born.

Growing up Italian in Brooklyn was special AND unless you were Italian, you didn’t know just how special. Having your own tomato garden, the milk man, the bread man, the fruit man were all part of the norm. Every Sunday we would attend mass at St. Jude, usually the 9:30 children’s mass and after church we would drive to Greenwich Village and spend the rest of the morning on Sullivan Street with Nonna and Nonno Cammarata . At around noon time we would walk around the block to Nonni and Nonno Ferrari’s apartment on Thompson Street, (218 Thompson street apartment 31 to be exact), join our cousins Luciano and Luciana and spend the rest of the day eating an Italian meal of homemade pasta, polenta, fritto and various meats and vegetables including our favorite “rabbit”, olives and fried zucchini -- this lasted most of the afternoon. We would do this Sunday ritual every week, after all it was just how things were done. And, throughout these family customs, the only thing Norma repeatedly stressed was the importance of an education and the dream of their sons going to college.

Today, Anthony Jr. and Adriano are blessed with friends and family as first generation Italian-Americans, both married, college degrees, good jobs and a house in suburban New Jersey and Long Island respectively - all the things Norma and her parents dreamed of when they made the journey to this county in the 1950s and all the things many of us take for granted -- BUT the Cammarata story doesn’t end here. Family tradition is still important and although the weekly rituals aren’t as customary as they once were, we are still connected, we cherish the family dinners, the holiday celebrations and maybe we are even more connected today with the internet and social media, it just looks different, more millennial-esque. While this may sound unconventional to some, it’s no different than the family values of growing up Italian -- it’s just the 21st century version of Italians working together in an office building and knowing and appreciating the value of education and family.

Thank you all for your unwavering condolences and for allowing us to tell our story. You are all a part of our story and for that we are eternally grateful. We will all miss Norma.

God bless you all.