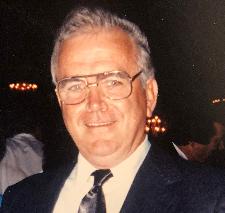 In memory of Katherine K. Kelley

Harold J. "Babe" Hayes died at the VA Hospital in Bedford on April 22, 2020 at the age of 85, after a long battle with Alzheimer's disease, with family by his side. Babe was born in Charlestown on July 2, 1934 to the late Harold & Mary (Noonan) Hayes. He was raised in Charlestown and graduated from Dom Bosco High School, Class of 1952.

After he graduated from high school he enlisted in the Marine Corp and served his country with pride as a Sergeant during the Korean Conflict from 1952 1955. Babe lived in Melrose for 10 years and had been a resident of Malden for over 40 years, where he raised his family.
(Babe raised his family in Malden, and resided in Melrose in retirement)

Babe worked for the M.B.T.A. for 30 years, a member of Machinist Local 264. He loved spending summers in Wolfeboro, NH and winters in Naples, Florida, in later years. Family came first in Babes eyes. Fishing was his passion and he spent countless hours on Crescent Lake sharing that love with his children & grandchildren.