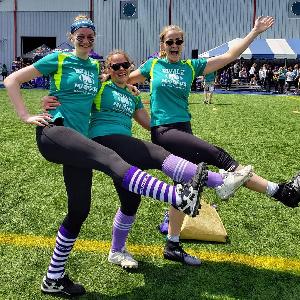 As a future public health practitioner, I'm invested in the Alzheimer's epidemic from a population health standpoint as well as a deeply personal one. In our population, the rate of this disease continues to rise even as we uncover more information about the brain and contributing factors. In my life, though, I've seen several of my grandparents be swallowed up by this disease. The worst part of this disease, to me, is the slow rate at which I've watched it strip away memories and details of my grandparents' personalities.

In the game, the Betas face off against the Taus, but off the field we're on the same side! Any donation to this cause is hugely appreciated and helps support our joint goal of advancing the care, support and research efforts of the Alzheimer's Association.

Thank you for helping us tackle this disease – win or lose, our true goal is a world without Alzheimer’s!