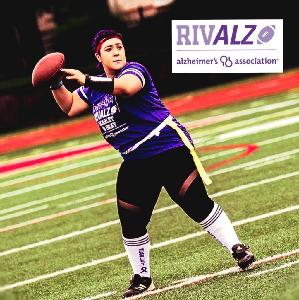 Women are at the epicenter of the Alzheimer's epidemic. Nearly two-thirds of the Americans living with Alzheimer's - and more than 60 percent of Alzheimer's and dementia caregivers - are women. So in an effort to #endalz the women and men of RivALZ Columbus are taking the field for a 11th consecutive year!

This will be my sixth year competing on the field as part of Team Scarlet. We may be opponents with Team Gray on the field, but when it comes to Alzheimer's, we're all on the same side.

This disease has affected the families of so many friends, and they are a constant reminder that it can affect anyone at anytime. I play to honor and remember the parents, grandparents and others that have battled this disease as well as to hopefully bear witness to the first SURVIVOR of this global health issue.

Your donation will advance the care, support and research efforts of the Alzheimer's Association. Thank you for helping us tackle this disease - win or lose, our true goal is a world without Alzheimer's!