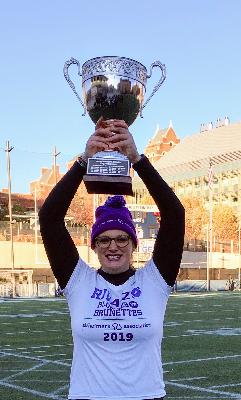 Alzheimer’s disease is the nation’s sixth-leading cause of death, and one in three seniors dies of Alzheimers or dementia.  It kills more than breast cancer and prostate cancer combined.

Why is this cause SO important to me?

First, because like many others Alzheimer's/dementia has affected me personally. I watched my grandmother fight dementia for almost 10 years before she passed away as a complication of the disease in 2017. I know firsthand the toll this disease takes not only on the individual, but on the loved ones that person is surrounded by. Second, because every 65 seconds someone develops this terrible disease and the best thing I can do to help prevent that is bring awareness and help raise funds for research.

I am trying to do everything that I can to help eradicate this nasty disease and I need your help to do it! Will you consider making a donation? It's easy! Just follow the link below. And if you donate $25 or more you will get a complimentary ticket to the game!!

Thank you in advance for your generosity – together, we can tackle Alzheimer’s disease!