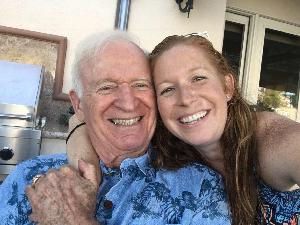 Alzheimer's is a disease that affects so many people in this world, their work, their everyday lives, including their family and friends' lives as well. I've been affected by Alzheimer's my entire life, starting with my great grandparents, moving onto my Grandfather Bill "Bronco", who is now living with this heartbreaking disease.

Caring for someone with Alzheimer's is a job in it's own and my Grandma Harriet has taken this job on wholeheartedly, just like many others in her situation. The Alzheimer's Association helps support those caregivers whom are giving their all for their loved ones living with Alzheimer's.

I've been playing/fundraising for the Alzheimer's Association since 2014, and don't plan on stopping until there is a cure. I play for my Granddad Bill, I play for his parents, I play for my Grandma Harriet, and I play to prevent anyone else that is near and dear to me from inheriting this dreadful disease.

Although I've, personally, known more men than women who have been inflicted with this disease, women are at the epicenter of the Alzheimer’s epidemic. Nearly two-thirds of the Americans living with Alzheimer’s – and more than 60 percent of Alzheimer’s and dementia caregivers – are women.  It’s time to take action by taking the field!

Please support my participation in RivALZ, a flag football game and fundraising competition to help end Alzheimer’s. We may be opponents on the field, but when it comes to Alzheimer’s, we’re all on the same side. This is a disease that must be defeated and we need your help to do it. Your donation will advance the care, support and research efforts of the Alzheimer’s Association.

Thank you for helping us tackle this disease – win or lose, our true goal is a world without Alzheimer’s!