Ride with Annie to End Alz! 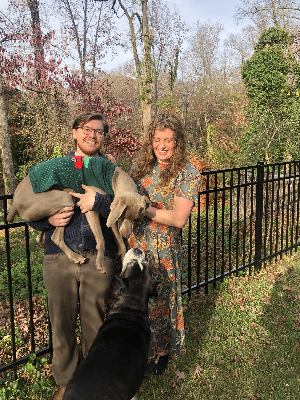 As many of you know, this July will mark the one year passing of my grandmother, Berniece Holt.   She was one of the  strongest and smartest women I knew.  After I was diagnosed with juvenile diabetes at age 3, she took on the task of learning everything she could about my condition. She learned how to count carbohydrates, administer insulin shots, and calculate boluses and basal rates.  She, with my Granddaddy Albert by her side, helped raise me and kept me safe when my own parents were working or unavailable.

She was always as sharp as a tack, coming up with witty responses when teased by Granddaddy.  She fought in the civil rights movement in the 60’s and went head to head with many, so-called “strong” men.  She was an amazing woman.  It is hard to imagine how someone of her standing would ever succumb to dementia/Alzheimer’s.  Unfortunately, it is a tale many of us know all too well.

The first time I noticed the beginning of her confusion was when I was in sixth grade.  I was on a trip to Washington D.C. to march against the war in Iraq with Grandmama and my mother.  While in our hotel room, I was checking my blood sugar and changing my insulin pump, getting ready for the day.  My grandmother made the comment to my mom, “Oh, she still has to do that? I didn’t know that was something she still had to deal with.”  This statement was coming from the woman who had taught herself everything she could about juvenile diabetes (a disease that doesn’t just go away) and kept me healthy for years.  Was she joking or was this a sign of something more sinister? Unfortunately, it was the latter.

The following 10+ years were a steady decline. From small, forgetful slip-ups, came the inability to drive and the loss of independence.  As things progressed, she began to require around-the-clock care in her home.  She was no longer able to make decisions for herself.  After that came the inability to recognize her grandchildren and sometimes even mistaking my mom for a sister she never even had.  While many of her long-term memories remained intact, her short term and immediate memories suffered.  She would ask the same questions over and over again for hours on end.   Endless questions would turn to endless agitation, requiring medication to control her behaviors.  Each hour of the day was different, and we never knew what version of Berniece we would get.   My granddaddy, who was 10 years her senior, could not understand what had happened to his beloved wife of 70 years.

A year after Granddaddy died in 2016, we were forced to relocate my grandmother into memory care/assisted living.  While in memory care, she continued to decline.  Eventually, she lost the ability to feed herself, experienced frequent falls, and her speech became incomprehensible.  She remained there until she was admitted to inpatient hospice for end of life care.  Prior to her last week of life, my family had been unable to see her for 5 months during the Covid-19 pandemic.  We will be forever grateful for the last week we were able to spend with her, even if she didn’t know who we were.

Unfortunately, my grandmother’s story is all too common.  At this time, over 5 million people in the US have Alzheimer’s and the projected number is only going to grow.   The treatment for Alzheimer’s Disease and dementia is limited and there is no cure.  Alzheimer’s and its associated diseases are ruthless. They will affect not only the person, but the entire family unit.  Our world was turned upside down, and we didn’t know how to right it, and many more are struggling with this same issue.   As easy as it is to look at the statistics and understand the severity of this issue, we must remember that the person with this disease is just that, a person, an individual with family, friends, memories, feelings, and needs.  This could be your mother, father, spouse, sister, brother, or even yourself.  The list goes on and on.  Too many people have succumbed to this illness, and it is time to take charge and find a cure!

In my grandmother’s honor, I am committing to The Ride to Remember through the Alzheimer’s Association South Carolina chapter.  I will be riding 252 miles over the course of the month of July.  This ride is usually done as a group over the course of three days, but due to the current pandemic, I and many other riders will be completing it virtually this year, in the hopes of being together for the three-day ride next year.  My goal is to raise $1000 in her name. The Alzheimer’s Association is committed to ending Alzheimer’s and other associated dementias through accelerated global research, driving risk reduction and early detection, and maximizing quality care and support.   All proceeds from donations will go to the Alzheimer’s Association to help fund future research and provide care and education to families in need.

Please share, follow along with me, and if you are able, donate to my ride.  Over the month of July, I will be posting ride updates, mileage counts, pictures, and videos of my rides as well as facts and education about Alzheimer’s Disease and its associated dementias.  Any and all help is more than appreciated.

Thank you for joining the fight to #ENDALZ! Your support means the world to me.