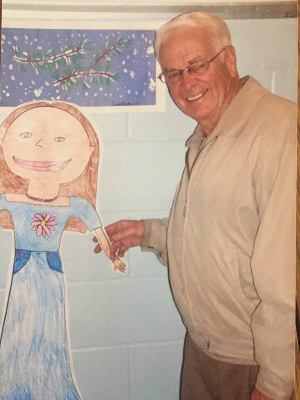 This August, I will be participating in the Falmouth Road Race for the Alzheimer’s Association. I am running to honor my grandfather, Joe Jackman, who I watched struggle with this horrible disease.

Papa was always there for me during my childhood. Not only would he attend my jazz band performances, but would follow the concerts by giving my an oral history of every song I had just performed.

Papa attended a majority of all my sporting events, even though I batted 10th in the lineup during little league.

Papa and I attended many sporting events, but primarily baseball and hockey. One of my favorite memories was arriving a few minutes late to a Bruins game. Papa assured me that, “Nothing happens in the first five minutes of a hockey game”. Sure enough, we missed a fight and the only goal scored throughout the game. While some might have found this upsetting, it is a hilarious memory that we shared, and one that I will never forget.

While he was there for me when growing up, I tried my best to be there for him when he was diagnosed with this disease. We would visit Papa and listen to all his stories. Our conversations would include Frank Sinatra and all the music from his childhood. He would also tell us stories of sporting events he witnessed, athletes he had met, or just his general enthusiasm for Boston sports.

This August I will be running in the 50th anniversary of the Falmouth Road Race on Team End ALZ. I've committed to raising awareness and funds to advance the care, support and research efforts of the Alzheimer’s Association®.