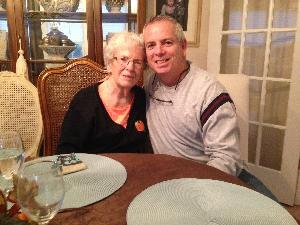 NOTE: FOR A FULL LIST OF ALL DONORS TO MY PAGE, SCROLL DOWN

I continue to press on in my effort to raise money for Alzheimer’s research, in honor and in memory of my Mom, lost this past Christmas morning, 2020, and my Uncle Hank, lost in Sep 2019 and also, of course, Mr. (Frank) Sullivan, lost in Oct-2009, the original inspiration for the Sully’s Buddies ride team. Sully's Buddies was formed by my best buddy, Sully (Paul Sullivan) as he began to ride in honor and in memory of his Dad, many years ago, and participate yearly in the “Ride to End Alzheimer’s MA/NH”.

Something happened as I began to fundraise this year for #RidetoEndALZ" cause. The outpouring of support continues to be, humbling and heartwarming. But also, in the course of my fundraising, many have shared with me about how they and their loved one(s) have been impacted by Alzheimer’s; and something told me to pay close attention to each and every story, and to remember, each and every person that I learn about, that has been affected. So, I began to write it all down, each and every person that shares, from the circle of people that I have reached out to in this effort to #ENDALZ.

I have seen the statistics, "More than 6 million people are living with Alzheimer’s today", and "1 in 3 seniors dies with Alzheimer's or another dementia". But now I am learning first-hand, just how prevalent this disease is and how much it has affected so many of those around me, in all areas of my life; And I imagine my Mom, if this were possible, in her pre-Alz mind, somehow having the ability to clearly remember her experience with the effects of Alzheimer's and I think of her, looking at me firmly, but with deep compassion and saying, "Tommy, oh my dear God, we have got to do something."

While I fundraise and as I ride, I will remember all of those above. I will also consider the many reasons to be hopeful as we all pitch in to help fund the many brilliant and creative minds as they work diligently to seek out solutions to treat and ultimately eliminate this relentless disease. Thank you all for your support. No matter what you can give, it all adds up. Every single dollar of support is deeply appreciated.

- More than 6 million people are living with Alzheimer’s today.
- 1 in 3 seniors dies with Alzheimer's or another dementia.
- It kills more than breast cancer and prostate cancer combined.

Right now, there is no shortage of ideas in Alzheimer's research- only dollars. By participating in the 2021 Ride to End ALZ, I've committed to raising awareness and funds to advance the research efforts of the Alzheimer’s Association®.

And you can help me. These dollars are desperately needed- for the more than 6 million Americans living with Alzheimer's, their 16 million caregivers, and millions more who have lost a loved one to this disease.

Please support my efforts by making a donation. All funds raised benefit the Alzheimer's Association and their ground breaking momentum in the field of Alzheimer's research. 90% of the funds raised go toward the Association's efforts to discover methods of treatment and prevention for Alzheimer's and other dementias.

Help me cycle towards a world with our first survivor and donate today!

The scrolling banner of donors shown on this page is capped at 50, but many more have contributed to my fundraising campaign to #ENDALZ!! See the full list of donors below, as of 6/10/21: