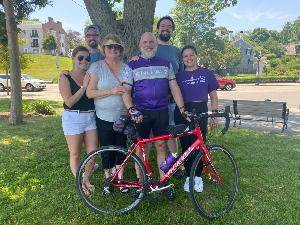 I can never thank enough all who have supported me (or will support me) in this effort.

Despite the heat, humidity and hills of Plymouth, despite the headwinds of the Cape Cod Canal, and despite the thunderstorms of Mattapoisett and Fairhaven, Team Doreen completed this 17th annual odyssey for Alzheimer's awareness and fund raising for crucial research.

Nearly 13 years ago we lost our beloved Doreen (Deardorff) Moul to Alzheimer's. A year later we lost Paul, her husband and life partner of 65 years to a broken heart powered by a still-sharp mind.

Every year since there's been a new, sad reason. Mary Lou's sister. Judy and Mark's mother, Mary. Kerry's mom. Karen's mom. Gretchen's mom. Tim's parents. Another Tim's aunt, who was like a mom to him. Sandra's brother-in-law, who is in end stages at age 75.

By participating in the Ride to End Alzheimer's, my family and I have committed to raising awareness and funds to advance the research efforts of the Alzheimer’s Association®.

More than 5 million Americans have Alzheimer's disease, and that number is expected to grow to as many as 16 million by 2050. Our future is at risk and we must come together to change the course of this disease.

Please support my efforts by making a donation. All funds raised benefit  the Alzheimer's Association and its work to enhance care and support programs and advance research toward methods of treatment, prevention and, ultimately, a cure for Alzheimer's disease.

I can never thank you enough for joining the fight against Alzheimer’s disease!