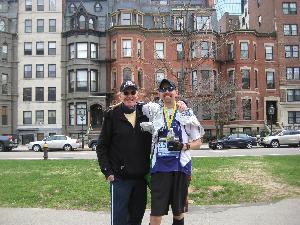 For my entire life my dad ran. They called him "Fast Eddy". No matter where he was that day, what time he had to get up or how bad the weather was, he ran. I honestly don't remember a day that he didn't run. We all thought he was crazy, and maybe he was. He would also race all the time, slowing building an extensive collection of medals and cheap race t-shirts from all the 5ks, 10ks, 1/2 marathons and full marathons. He was still racking up the miles into his early seventies. We thought nothing would ever stop him. Until something did.

It was during this time that I started running with him and eventually for him. I thought I would run a single marathon to raise awareness for Alzhemier's and then be done. But something happened. I kept running. I ran when my dad got very sick. I ran the day he passed away. I ran the morning of his funeral. I just kept running.

This year I will run my seventh marathon in honor of my dad. It's special considering he ran 7 marathons in his lifetime. Once again I am running to raise money and awareness for Alzheimer's to help those like my dad battle this horrible disease.

Will I stop at seven? Nah,  I'll probably keep running, just like dad would have.