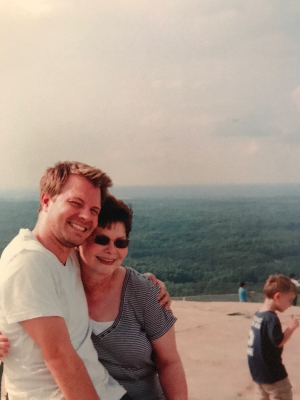 By participating in this event, I've committed to raising awareness and funds to advance the care, support and research efforts of the Alzheimer’s Association®.

Why am I Running for “Joy”, well because Joy was my mothers name. Alzheimers took her away from me, and way too early. She was 68 when she died, but the disease began its impact on all of us about many years before that. I knew about Alzheimers because I watched and heard about the horrible impacts it had on my grandmothers life, my mom’s mom, and witnessed the sadness in my mom’s face as she lost her mother. Little could we have imagined that less than 10 year’s later my mom’s life would be ended by the same disease.

Being aware of the disease, through the loss of my grandmother, I was fearful that it would strike my mom. I found myself looking for signs, wondering, waiting. It wasn’t long. Around the same time as my grandmother dying the evidence was pointing to the sad revelation that we would loose my mom as well. She was about 58 at the time and had come to visit us in Florida to visit and to help us with the boys. We had a young family then of three boys and our oldest Cyrus was in kindergarten. “Manga”, as they boys called her, was to pick Cyrus up from Kindergarten. She had already displayed signs of forgetfulness or retelling of stories. Although I was always fearful that these were signs, I chalked them up to me being hyper sensitive to the disease because of what I had witnessed with my grandmother and my own fears. However, today was different, I arrived home and Cyrus wasn’t there. She had forgotten to get him. It was clear that there was no communication or confusion over her role and responsibility with this, and this was absolutely out character that she would ever not be dependable with her grandchildren. I knew that day that it was the beginning of the end.

For the next 10 years I watched and witnessed my moms slow decline as the disease robbed her of life. I dreaded most the day, I knew would come when she would forget me. That was one of the saddest days of my life. Fortunately the spirit of the love she shared for me could still be felt for a few more years, although she had forgotten my name or why she knew me. The disease continued to drain her memory of family and turned on her own body, shutting down her ability one by one to perform daily functions that are so innate to each and everyone of us. In the end she laid there in a bed, unable to move as the disease shut down her last natural instinct, breath.

She continues to live on in my memory but so does the the disease. Mostly through fear. Fear that it will come for me next or one of my siblings. I do hold some hope, that a cure can be found or at least something that can slow its progress. Since I don’t know when or if it will come for me and that is outside of my control, today, I can celebrate my health and gratitude to not be impacted from this disease. Grateful that I can run this marathon to celebrate that fact, to celebrate my mother and to raise awareness and money to help combat this terrible disease.