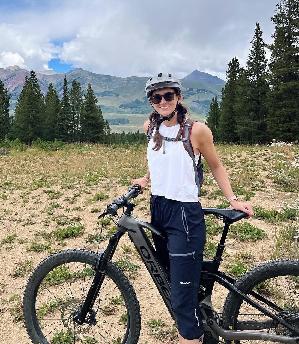 On October 9th I will be running the 2022 Chicago Marathon! I’ve always had a goal of running a marathon and choosing which charity to run for was an easy choice. I will be fundraising and running for the Alzheimers Association.

My late grandmother was diagnosed with Alzheimer’s disease when I was in middle school. She eventually moved into our house which provided so many memories together that I have come to cherish. Many days when I would get home from track or soccer practice, the two of us would watch her favorite movie, the Sound of Music. Some days she would forget that we’ve already watched it and would ask to watch it for a second second time. For those who don’t know, the sound of music is 2 hours and 54 minutes long. That added up to a lot of quality time together with my grandmother, Julie Andrews, and me. Just recently I went on a trip to Colorado where there were mountain ranges with open fields filled with beautiful flowers. I couldn’t help but smile because it made me think of all these memories and I could still hear my grandmother singing along to the Hills are Alive.

I’m so fortunate for all of the memories I have with her, even in the end while we were watching her declining right in front of us. Alzheimer’s is a terrible disease for both those afflicted with it and their families. I couldn’t be more excited to raise money for this cause and to run with the Alzheimer’s Association come October!


Currently, more than 6 million Americans have Alzheimer's disease and that number is expected to grow to nearly 13 million by 2050. Our future is at risk and we must come together to change the course of this disease.