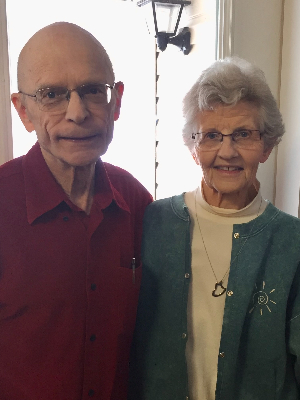 By participating in the Chicago Marathon, I've committed to raising awareness and funds to advance the care, support and research efforts of the Alzheimer’s Association®.

My husband's grandparents, Bob & Bernice (pictured above), have both been diagnosed with Alzheimer's - keep reading to hear their story.  I am running for them and the countless others affected by this cruel disease.

Sponsor a mile for $50!  While I run the marathon, I will think of you and run in your honor in your fight to end Alzheimer's.  Copy & paste this link to select a mile to sponsor me and for more information (best viewed on a desktop/laptop):  https://1drv.ms/x/s!AkRr-qZBA8S_g_1jPcDqzHyOmPn5kA?e=xWkm1s

Or you can support my efforts by making a donation here. All funds raised benefit the Alzheimer's Association and its work to enhance care and support programs and advance research toward methods of treatment, prevention and, ultimately, a cure for Alzheimer's disease.  THANK YOU for joining the fight against Alzheimer’s disease!

Bob and Bernice were married on June 8, 1957 and spent the next 63 years facing all the ups and downs of life together, with Alzheimer’s Disease being one of the greatest challenge of their lives. Their story is just one of many who have traveled down this difficult road.

Bob was a business owner with an entrepreneurial spirit who enjoyed mentoring new business owners. He could also build or fix anything and enjoyed teaching his skills to others, including his three daughters. He was a voracious reader and kept up on business, technology, investments, health, cars and sports. He loved serving their community and church family and never lacked for opportunities to be of help to others. Bob was diagnosed with Alzheimer’s Disease in 2009. This was devastating news to everyone, but especially for Bob as he dealt with the continuous loss of long time skills, reading comprehension, and his independence. He was able to live at home until April 2018 when Bernice was hospitalized due to a bleeding ulcer and exhaustion from overextending herself caring for Bob. It was a tough transition for both of them as Bob moved to a memory care facility, but they made the best of it as they always did. At the end of his life, Bob no longer recognized his family or friends, but he always knew Bernice, the love of his life.

Bernice was a kindergarten teacher and then a much-loved substitute teacher whose students still talk about her fondly decades later. She was an accomplished seamstress, avid gardener, wonderful cook and amazing baker. She enjoyed being involved in many community, school, and church activities and organizations. But Bernice was always happiest in her roles as wife, mother, grandmother and great-grandmother. In late 2018 it became clear to family and friends that Bernice was struggling cognitively as she exhibited delusional thinking and would also forget to take her medications and even to eat. Extensive neurological evaluation revealed that Bernice had dementia, most likely Alzheimer’s. Bernice and her daughters were told it was no longer safe for her to live independently and the dr. recommended she move into the memory care facility with Bob. Bernice was horrified at the thought of losing her independence and wept in the doctor’s office, which had everyone else in tears as well. Thankfully, she soon found it was a blessing to be with Bob in the memory care facility. It was not how they had planned to live out their “golden years”, but they were together and that was a gift.

Bernice does not know that Bob passed away in October 2020, which is a great blessing. She believes he is with her every day and they live a wonderful life together in her mind. She is happy most of the time in her world, and for that we are very grateful. As it is said, Alzheimer’s is a “cruel thief”, but we have found that we can lessen the loss by finding the blessings in the midst of the difficulties.

Recommended Books:
“Learning to Speak Alzheimer’s” by Joanne Koenig Coste
“My Two Elaines: Learning, Coping and Surviving as an Alzheimer’s Caregiver” by Martin Schreiber
“Coffee with Mom: Caring for a Parent with Dementia” by Mike Glenn
“The End of Alzheimer’s” (and many other books) by Dale Bredesen, M.D.