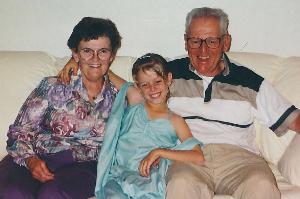 I'm choosing to run with the Alzheimer's Association in memory of my grandma, who battled this awful disease. We watched it rob her of her memories, sense of time and place, independence, and quality of life. At times, the disease robbed us of the person we knew, making it feel as if we'd lost Nana before she'd even passed away. We've also had to face the realization that family history is believed to be a strong risk factor for developing the disease.

More than 5 million Americans are living with Alzheimer's, and that number is expected to grow to as many as 16 million by 2050. It is the sixth-leading cause of death in the United States, and medications only alleviate cognitive and behavioral symptoms temporarily. They also don't work for everyone. There are no FDA-approved medications for slowing, halting, or reversing the progression of the disease.

Alzheimer's also takes a heavy toll on caregivers, both financially and emotionally. Every year, 15 million Americans provide more than 17 billion hours of unpaid care for family and friends with Alzheimer's, leaving them little time and energy to care for themselves.

These statistics illustrate the critical need for research into this devastating disease. Please help me support the Alzheimer's Association in their efforts toward finding better treatments and supporting those already affected.

I met my minimum!
I've raised $1,250 or more in the fight against Alzheimer's