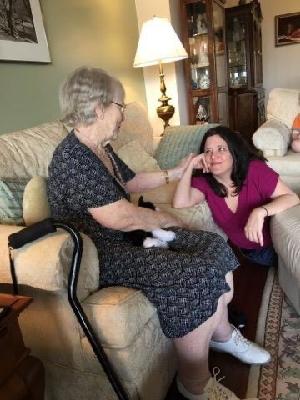 When I was in Kindergarten, I competed in the dreaded mile run as part of our annual Field Day.

I was dead last.

With my short stature and a general distaste for producing sweat, what took most kids 10 minutes took me much, much longer. This did not deter my grandmother (Yiayia), who cheered her heart out for me and declared me the best runner ever.

Despite her enthusiasm, I would not discover a passion for running until 2003, when I ran my first marathon.

Six marathons later,  I ran Chicago in 2017 in honor of my sister Jessi, who had recently been diagnosed with lymphoma. The day was hot, my training left (frankly) a LOT to be desired, and I finished in easily my worst marathon time ever which is saying a lot because while I am a passionate runner, I am still SLOW. So running in her honor made it my most rewarding marathon, but I also swore it would be my last.

In that same year, my biggest cheerleader, my beloved Yiayia died of Alzheimer's disease.

Yiayia was loving and bawdy and wise. She pulled all of my baby teeth and had a lap that fit all of her grandchildren and some of their friends, too. She supported me through my "drop out of college to be an actress and get a tattoo" years, as well as my "go back to college and join the Peace Corps" years. We shared a love of otters and tea and watching her gradually be stolen away from us long before she died was absolutely devastating.

Because of Yiayia and so many others, over the past four years, my commitment to the mission of the Alzheimer's Association® has only grown. And this year I will eat those words about no more marathons by running my seventh marathon (and third Chicago Marathon) on October 10th in memory of my Yiayia with the Alzheimer's Association's ALZStars team.

By training for and running 26.2 miles, I've committed to raising awareness and funds to advance the care, support and research efforts of the Alzheimer’s Association.

Currently, more than 5 million Americans like my Yiayia have Alzheimer's disease and that number is expected to grow to as many as 16 million by 2050. Our future is at risk and we must come together to change the course of this disease.

By making a donation, you help enhance care and support programs and advance research toward methods of treatment, prevention and, ultimately, a cure for Alzheimer's disease.

Every dollar raised means we are closer than ever to finding the first survivor. And that will mean that someone's Yiayia who squatted down to cheer them on in Kindergarten, will also be there at the finish line of the seventh marathon they swore they'd never run.