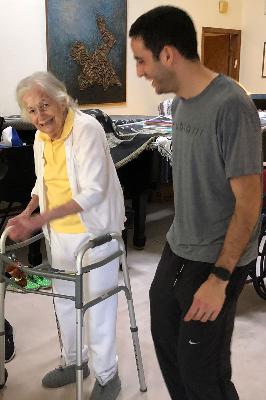 This year I am running my 9th marathon to support my Grandma’s ongoing strength as she battles a later stage of Alzheimer’s disease.

I learned from my Grandma the love of exercise and that life is better in motion.

When I was young, my Grandma would take my sisters and I to a park near her Denver home and would power walk faster than any of us could run. She wouldn’t stop, not even for her struggling grandkids. I realized I should just try to find a way to keep up.

The foundation of keeping life in motion and never stopping is something I’ve learned a lot from my Grandma.

For years, my Grandma has battled Alzheimer’s. During the entire time, I’ve seen her continue to fight the disease in all the ways she can.

To support my Grandma and others who have Alzheimer’s, I've committed to fight the disease by raising awareness and funds to advance the care, support and research efforts of the Alzheimer’s Association®.

Please support my efforts by making a donation. All funds raised benefit the Alzheimer's Association and its work to enhance care and support programs and advance research toward methods of treatment, prevention and, ultimately, a cure for Alzheimer's disease. Thank you for joining the fight against Alzheimer’s disease.