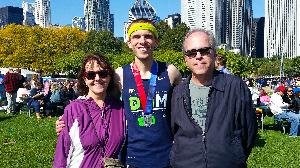 Mom, me, and dad at the Chicago Marathon

I am running the 2021 Chicago Marathon with the ALZ Stars team, raising money for the Alzheimer's Association in honor of my mom.

My mom, Nancy Thompson died of dementia on May 14, 2021. In her 60s, she developed early-onset dementia. It started off with difficulties with her short-term memory and her cognitive abilities. As the dementia progressed, she had difficulty walking and would move slowly. It progressed to a point where she could not walk without assistance. The pandemic was really rough for her and my dad, Craig. The dementia progressed as they were isolated at home. About a month ago, she couldn’t move and ended up in the hospital. A stay at Iowa City Rehab was followed by a move to Briarwood Health Care Center for a couple of weeks.

The last month of her life was extremely hard for her. The anxiety made it so she was terrified to move. I went to see her almost daily and it was hard to see her in pain. I was also amazed. Despite all that she was going through, she kept a positive disposition. Her smile came to her as easily as it always did.

We had many laughs together during those last visits. We listened to music together and she told me stories about her childhood or her career that I had never heard before. I learned she had a dog as a kid, I didn’t know that. I learned she claims that dad has never heard her sing.

I saw the way that she was still so kind to everyone she interacted with. The staff at the two care facilities would have to move her in her bed sometimes and it scared her so much to move. But after they were done, she would thank them. She told them about her family. She told them about her new granddaughter Nina, whose pictures and even just the mention of her name would always cheer her up. She asked the staff members questions about their families. She told someone who worked there that I was a nice person. Still managing to embarrass me with that one. The staff loved her and told us how kind and sweet she was.

I’m grateful there are some things that dementia didn’t take from her, chief among them her kindness. It also did not take away her love for dad. She held his hand when she got scared, and one time when he visited, she was so visibly excited to see him. He said it reminded him of a specific time, back in the early days, when they had been apart and he returned to Marshalltown. When she caught sight of him, she had that look of excitement when you are finally able to reunite with the person you love. He saw that same look in her eyes that day in the care facility.

I’m grateful for the time I got to spend with her that last month. I’m grateful that she is no longer in pain. And I’m also broken that she won’t get to spend more time with all of us here. That she won’t get to travel more with my dad, which is something they wanted to do a lot more of but were unable to because of the dementia. Instead, he spent the last years of her life as her caregiver.