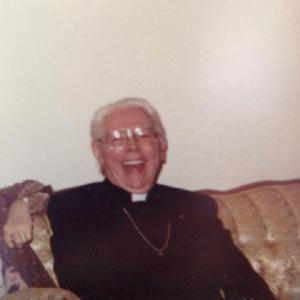 I will be running a Mud Run Obstacle Course (in June in Tennessee) in honor of a family member that suffered from dementia in support of the Alzheimer's Association Longest Day Event.

My beloved Uncle Elwyn suffered from dementia in his final years and it was heartbreaking for the family. Not simply because it’s awkward and uncomfortable but because this was a man who was so eloquent – he was a minister in the Episcopalian Church.  His sermons strengthened the congregation, healed the spiritually impaired and ignited sparks of faith within the skeptical.

His descent was at first slow but inexorable.  I still remember to this day sitting right next to him on his left side during a regular family get together.  Only recently (maybe a couple of weeks prior)he and I had shared a conversation on the Book of Ecclesiastes. His plate was prepared by Aunt Dottie, his wife, when he touched my right arm and looked at me with a pained expression.  He looked down at his plate then looked to my left. He was all but frozen.  His eyes rolled.  His mouth moved from side to side.  He mumbled. His mouth opened to form words but he couldn’t express them.  I met his gaze and, out of deep respect for him, I waited to hear a wonderful comment that would either pick up on a recent conversation or begin the table on a new topic.   So I waited an uncomfortable time to give him the ability to make his opening remark.  His body gestured back and forth across my plate towards the butter dish to my left.  When I realized that he couldn’t remember the word “butter”.

After a moment, I caught my bearings and asked, “Would you like some butter?” He sunk in his chair dejectedly, looked down at his plate shamefaced and heaved a very heavy sigh.  I saw him after that night many times.  But each time was harder and harder since he became less and less communicative while still retaining a consciousness that revealed he knew his fate.  He passed away a few years after that but that was my introduction to slowly losing a close family member before your eyes even though they’re physically still there.

The first jarring introductory experiences are memorable but these give way to a plodding, insidious illness that saps both the victim and their loved ones - both of precious memories and proper farewells.

On June 20, Members of The Brown Family are participating in The Longest Day, an event to honor the strength, passion and endurance of those facing Alzheimer's disease. From sunrise to sunset, my team will complete activities that we love or that Uncle Elwyn loved to raise awareness and funds for the care, support and research efforts of the Alzheimer's Association.

We know too well the devastating effects this disease has on loved ones and caregivers.  We hope in some way through our efforts to raise awareness and to do our part to help end Alzheimer's.

Today, over 44 million people across the world are living with Alzheimer's, including more than 5 million Americans. In the United States alone, more than 15 million caregivers generously dedicate themselves to those with Alzheimer's and dementia. And these numbers will only continue to rise unless we take action.

Together, we can show those facing Alzheimer's disease they are not alone. Please make a donation to our team today and help celebrate on June 21st...the longest day...the summer solstice.