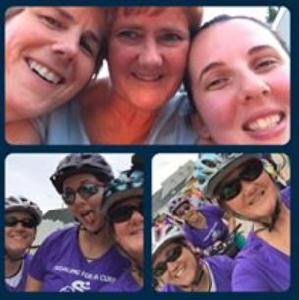 Pedaling for a Cure

Welcome to 'PEDALING FOR A CURE' Team Page

WOW June is already half over.
June is Alzheimer's Awareness month and the Ride To End Alzheimer's has been going on thruoghout the month due to it be virtual.

If you have already donated Thank you So Much!! If you can't right now please just pass along the word to help spread awareness. If you would still like to donate, we have till July 31st but way wait .. Did you know that between 2000 and 2019 deaths from heart desease have decreased 7.3% while deaths from Alzheimer's have increased 145%.. Lets help lower that number donating towards research to End Alzheimer's.

Together, we can advance research to treat and prevent Alzheimer's, and provide programs and support to millions of people affected by the disease. My team is committed to raising awareness and funds to find a cure for Alzheimer's. 90% of all the money we raise is going to research, so far the Ride to End ALZ has raised over $7.1M!

Help us get one mile closer to a world without Alzheimer's.

Pedaling for a Cure