The Alzheimer's Association, Mississippi Chapter is advocating on behalf of those living with Alzheimer's disease and dementia in our area.

Addressing the Alzheimer’s crisis is as much a matter of public policy as scientific discovery, and we need your help to change the future of this devastating disease. As an advocate, you will be invited to engage public officials and policymakers in a variety of ways, urging their support for critical Alzheimer's legislation and policy changes. 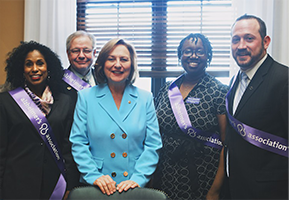